MAX Karters battle at the Vaal

A Fine Day of Rotax Max Karting at Vereeniging

The Vereeniging Kart Track hosted the Rand Kart Club as the Fourth Regional Round and Fifth Club Round of the Rotax Gauteng Kart Championships rolled into V-Town on Saturday. An initial threat of afternoon showers proved false. No rain and plenty of hot on track action provided a thrilling day of racing on the fast Vaal track.

With several top Gauteng DD2 competitors falling ill before lights out on Saturday, it was Niko Zafiris who capitalised as he beat Kian Grottis in two of the three races to take top-class DD2 gearbox kart honours for the day. It was incredibly tight upfront as Zafiris and poleman Grottis traded the fastest laps throughout races 1 and 2 before Grottis set the pace out front in race 3. There was just as much a battle for the final step of the podium between Marcel de Beer and Dusan Radojevic. De Beer claimed the spoils there as he beat Radojevic in two of the three heats. 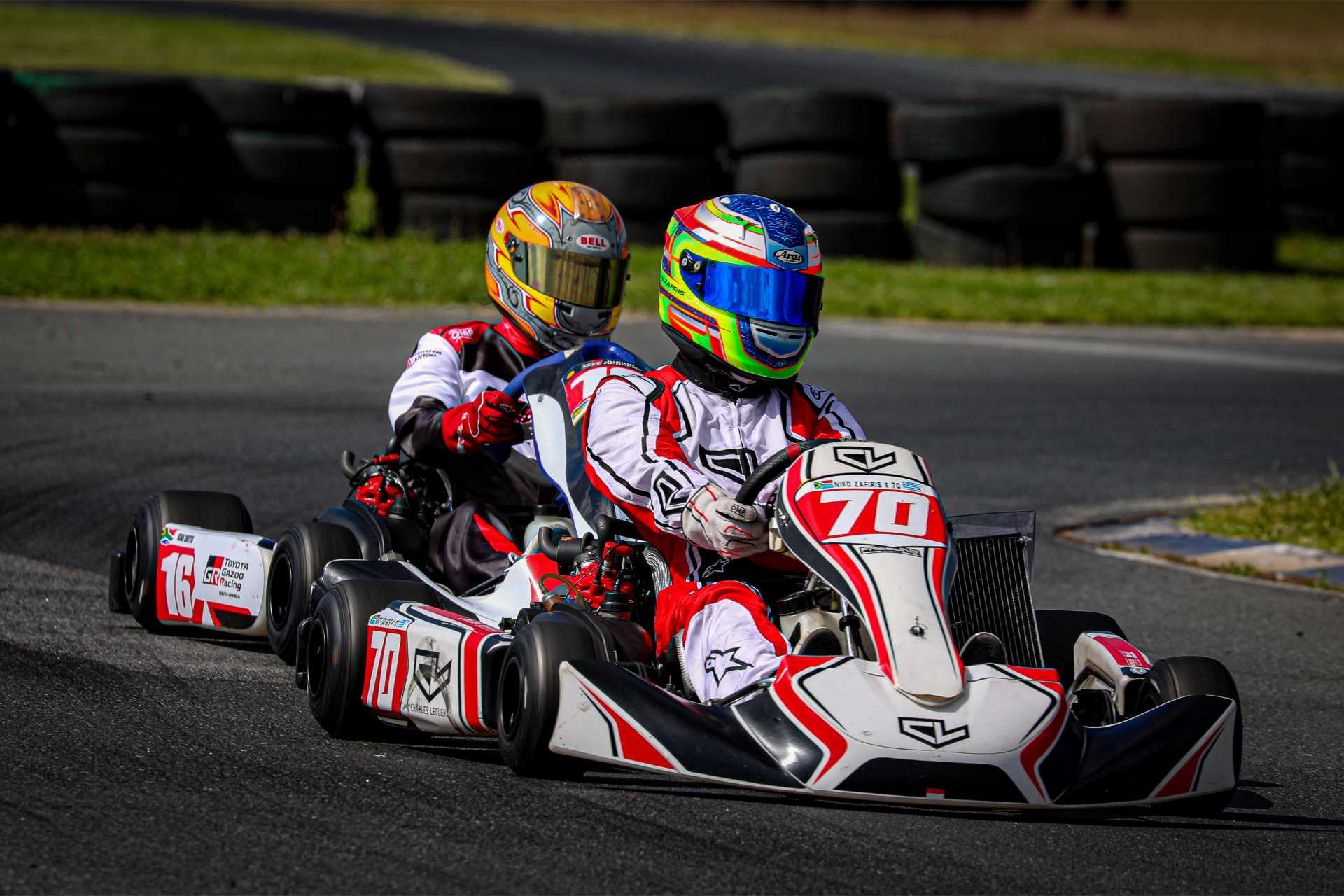 Older drivers who have no issue going very fast an inch from the ground. The Veterans put on a great show of sportsmanship and intense competition. Philippe Chapat came away happiest of the lot as he trotted to a trio of DD2 Veterans wins while the scrap for silverware went down behind him. Frikkie Cornelius’ two seconds and a fifth was enough to secure him second overall and consistent driving from Jonathan Kairuz throughout the day earned him third overall. Rob Nicholson was best of the rest in fourth followed by Robert Fulton, Derrick Joseph and Johan Kruger. 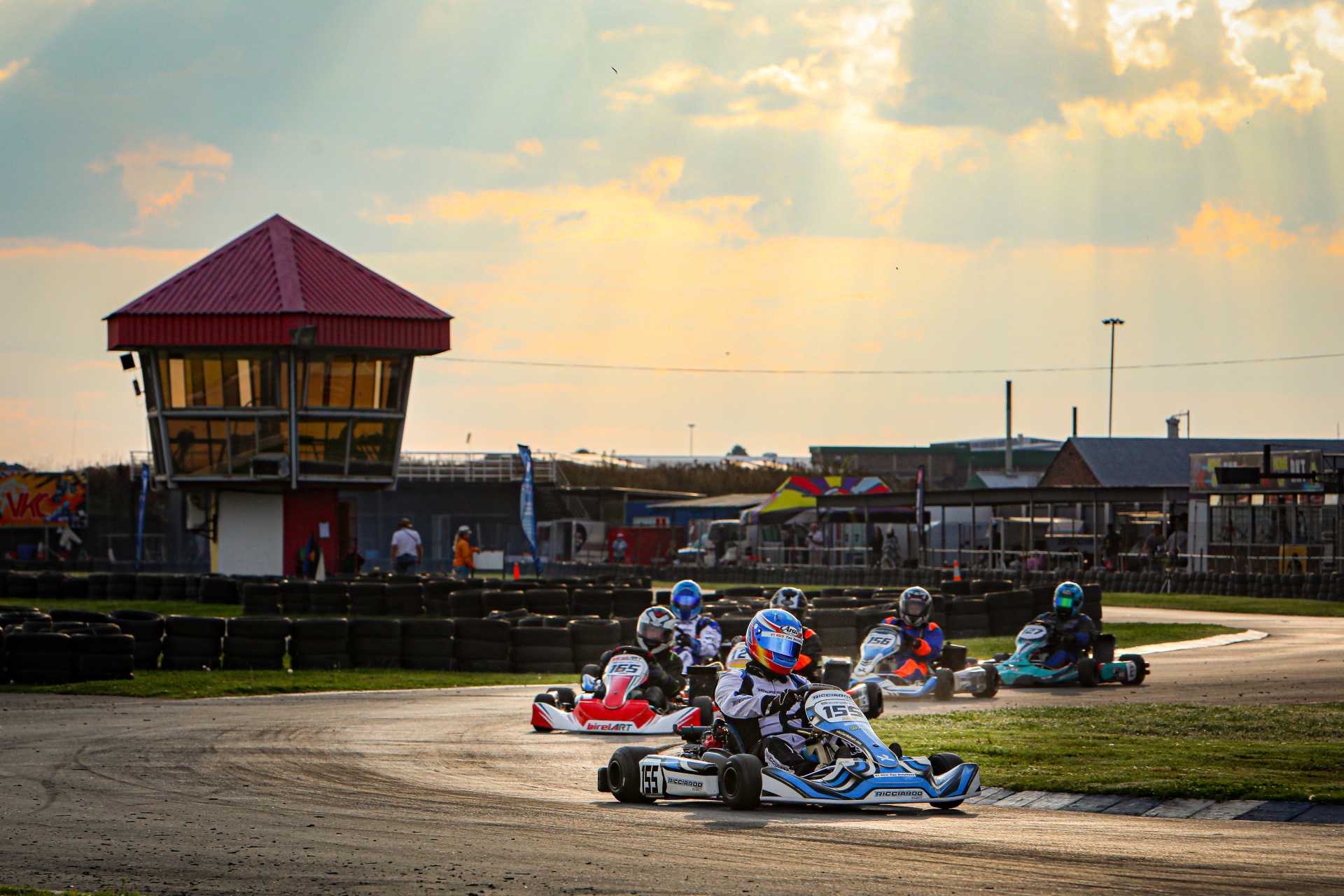 At times too close to call, Senior Max proved to be a showstopper on Saturday. Moosa Kajee overcame opening race winner Muhammad Wally two wins to one to take the day. Race 1 was exhilarating as Kajee, Wally, Olerato Sekudu and Karabo Malemela all jostled for the win. Sound drives from both Sekudu and Malemela in races 2 and 3 ensured their third and fourth overall respectively as Ethan Bostander, Roshaan Goodman and karting comeback kid Tristan Losch rounded out the top 7. 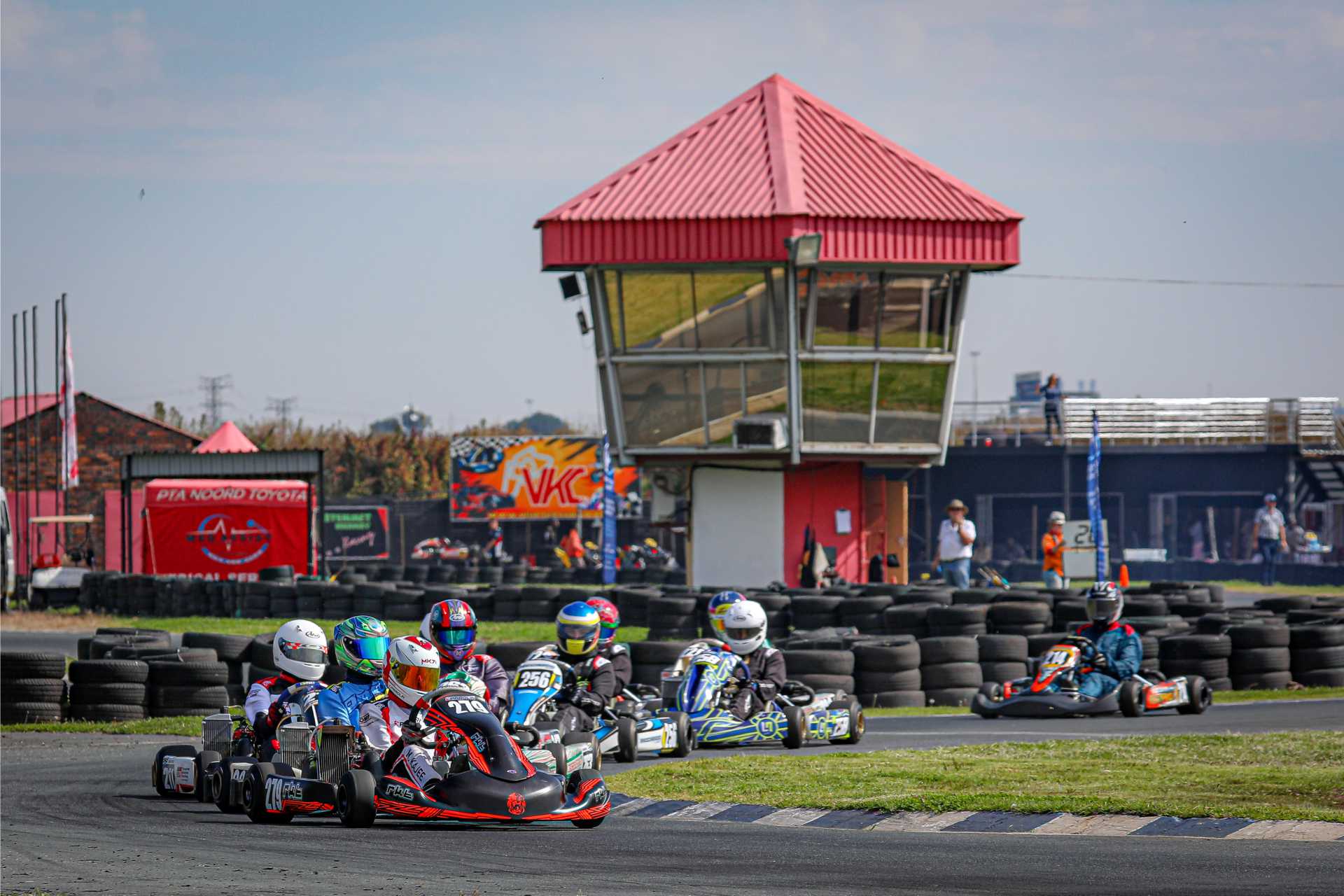 Just as in Senior Max, there was similar action in the Junior Max class, albeit mostly in the wake of in form man, Toyota Gazoo Racing Academy’s KC Ensor-Smith. He checked out for three impressive wins as the talented pack of drivers squabbled behind him in each race. Emerging at the top of that fracas were Wian Boshoff and Nicolaos Vostanis as they secured themselves the final two spots on the podium and some handy Junior Max points. Erich Heystek took fourth followed by an unlucky Jayden Goosen having shown top three pace throughout the day and Ndzalo Khoza. 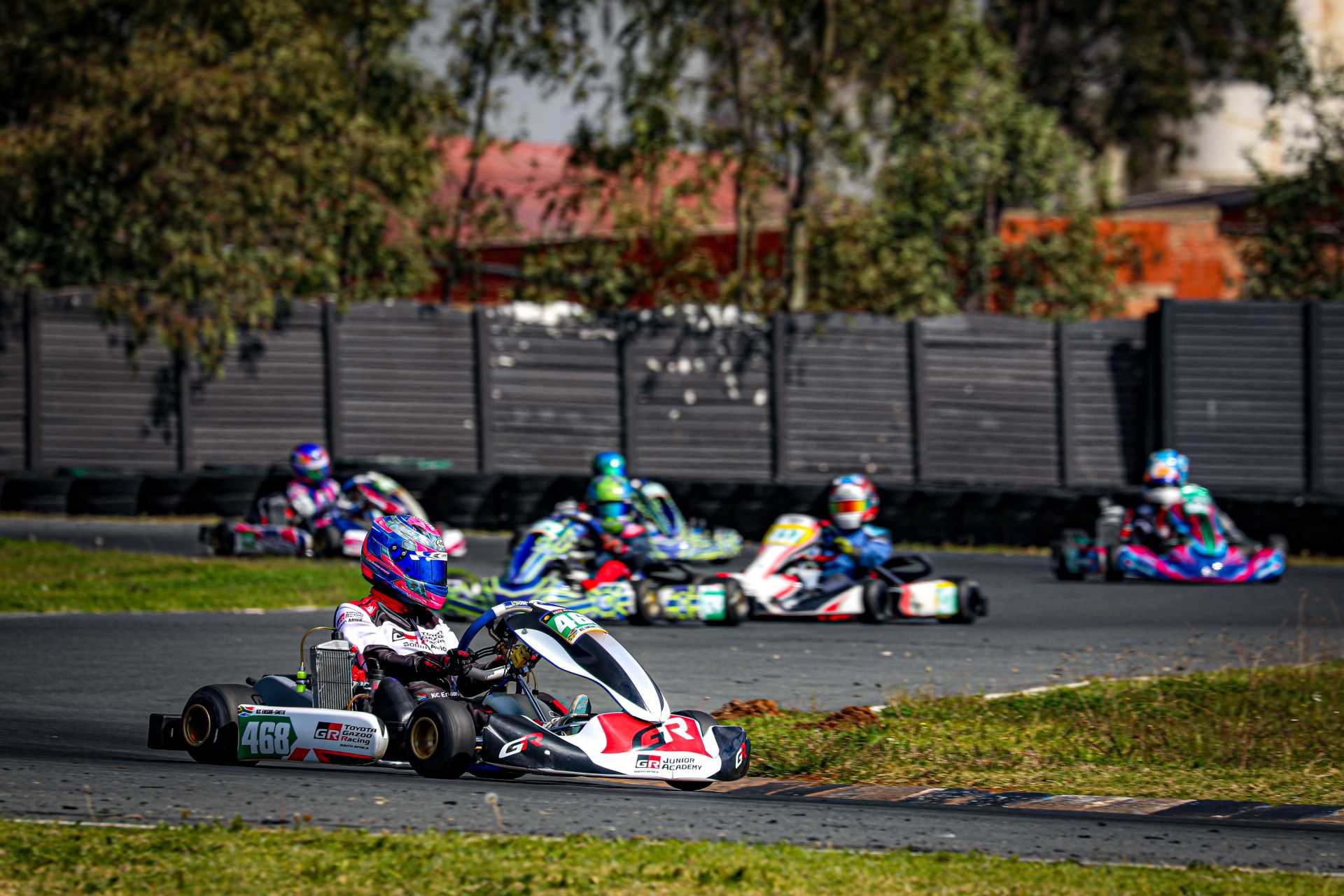 Ensor-Smith out in front, his desired Junior Max place in 2022. – Motorsport Fanatix™️

Strong grids were once again a feature of the primary school classes. Kicking things off with Mini Max, there wasn’t much to separate Caleb Odendaal, Adam Kajee and Reagile Spice Mailula in qualifying. Less than a tenth of a second to be exact. This set the tone for an incredible tight day of racing in what could have been confused for a game of chess, especially in races 1 and 3, where moves for the lead needed to be calm and calculated.  Current Championship leader Odendaal came away with the overall win by just a few points over Kent Swartz, who drove away in an impressive race 2 performance.  Consistent performer throughout the day Aadam Kajee was a close overall third while Amani Kinyua pipped Sebastian Dias and Reagile Spice Mailula to fourth. 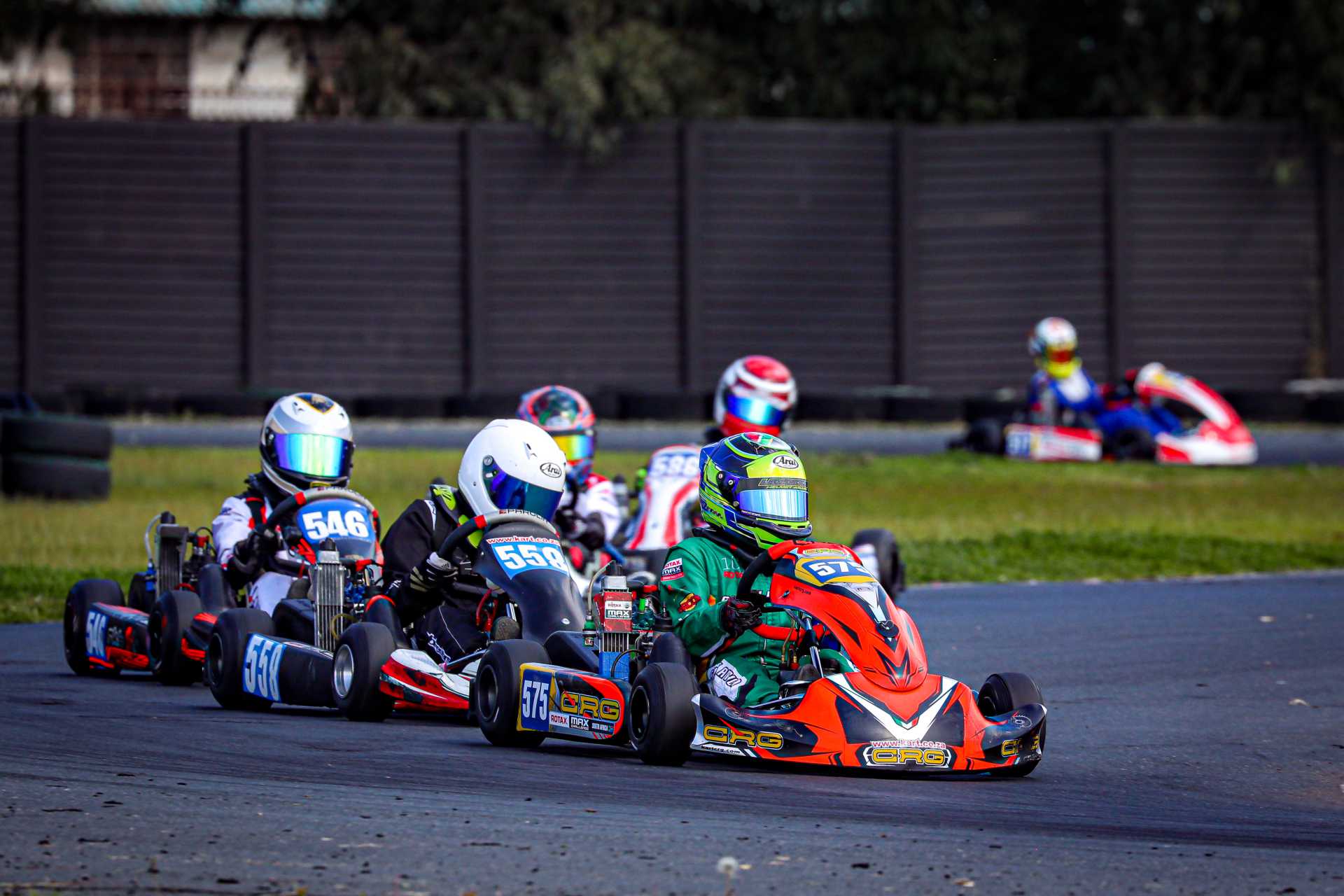 Incredibly close racing was the order of the day, as not much separated the Micro Max field in terms of lap times. Anyone of the top 5 had a shot at victory after just 2 tenths covered them in qualifying. It was however Rafael Da Silva who narrowly held and lead in races 1 and 2 before dominating the final race of the day. He emerged as the overall victor with three race wins over Tayln Patel each time, seeing Patel to second overall.  A delighted Johan Nolte fought off stiff challenges from Emma Dowling, Rafael De Sousa and Cristian Verheul to claim the final spot on the winner’s podium. 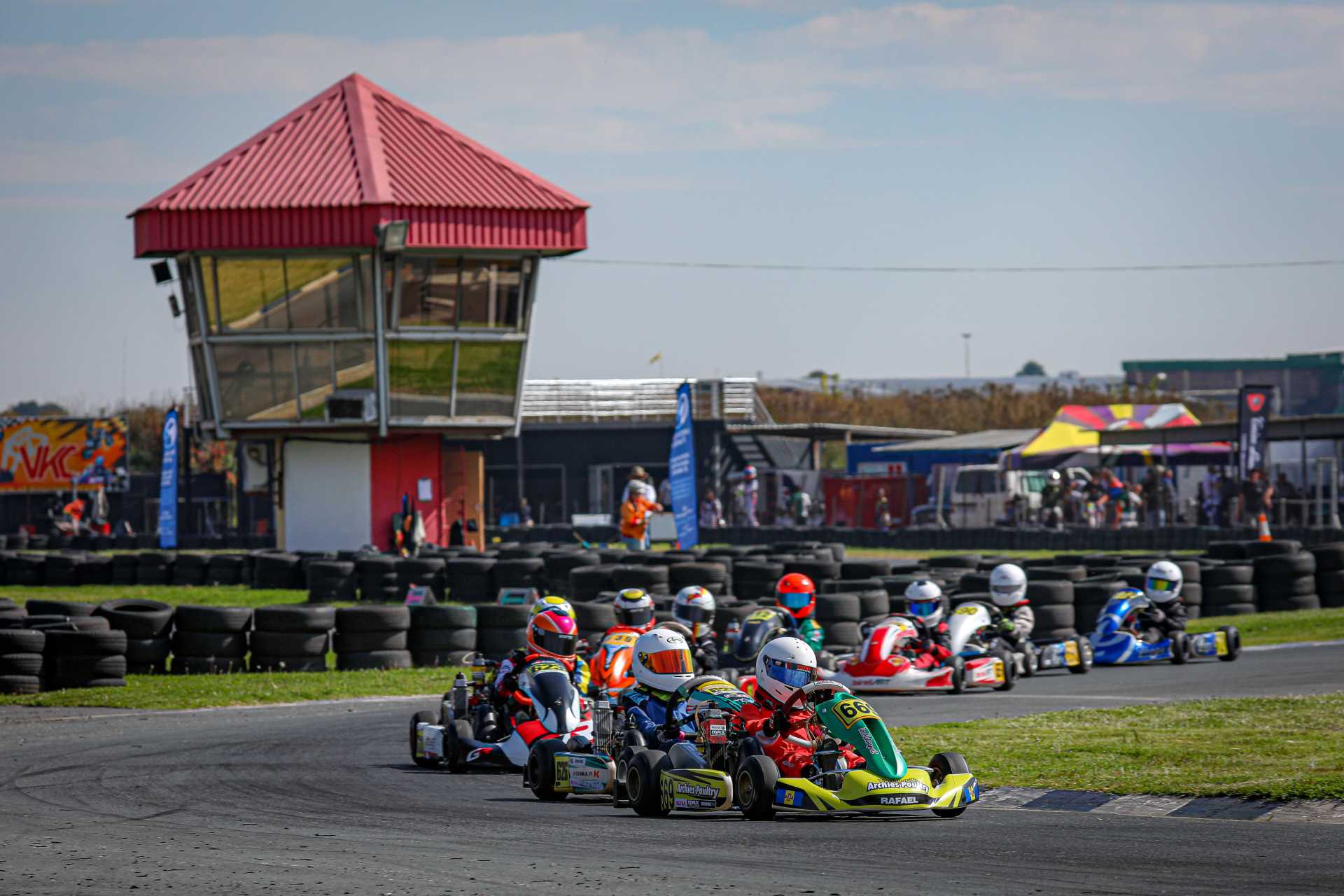 The impressive Bambino class put on its usual display of exciting karting action. Championship leader going into the Vaal round Noah Cronj claimed pole and a race 1 win before technical issues saw his Top Kart Blue Boy limp to the checkered flag in races 2 and 3 resulting in sixth overall. While Cronje struggled with his kart, Diego Antunes and Brodi Dowling challenged each other at the sharp end with Antunes narrowly winning out on each occasion in races 2 and 3. This was enough for him to take overall Bambino honours on the day ahead of Dowling and an impressive Adriaan Steyn in third. Fourth placed Luhan De Wet and fifth, Callum du Toit, can both be proud of their performances. 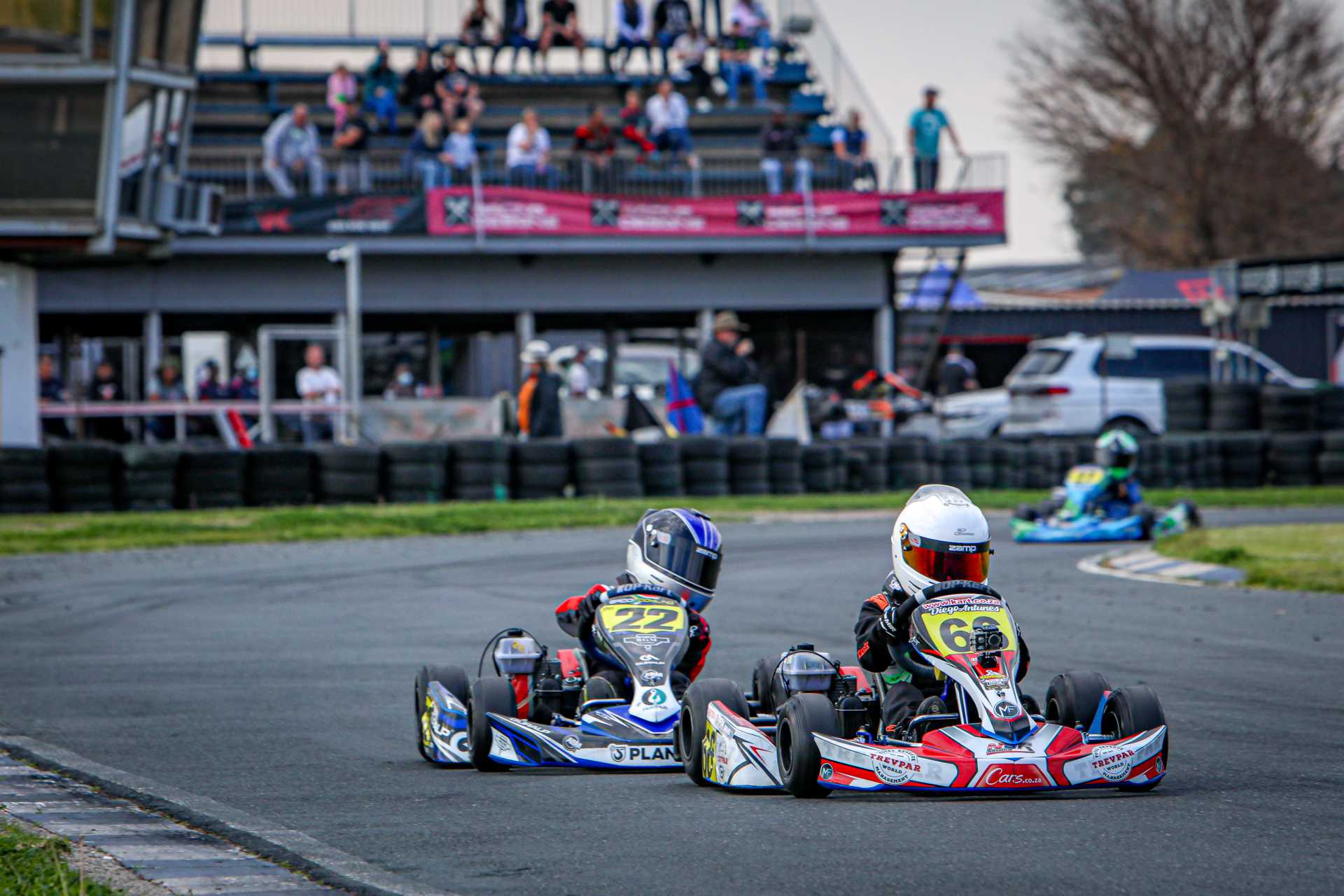 Antunes dealing with pressure from Dowling in Bambino. – Motorsport Fanatix™️

The next regional and club rounds of the Rotax Gauteng Kart Championships are at Formula K on 4 June, but before then, there’s a KZN round at iDube Raceway in Camperdown coming on Sunday 22 May followed by a Cape Town Rotax Regional round at Killarney Saturday 28 May. Then it’s all eyes on Benoni for Round 2 of the Rotax South African Kart Championships over the weekend of 25-26 June.

Don’t miss any of the action!